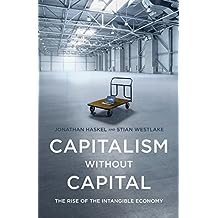 This new book by Jonathan Haskel and Stian Westlake called Capitalism without Capital: The Rise of the Intangible Economy is a great contribution to the literature on intangibles.

This book was greeted with reviews that I found initially discouraging as they described the novelty of the information. Amazon’s blurb calls it “The first comprehensive account of the growing dominance of the intangible economy” which is far from the truth.

But it’s important to note that the authors open their acknowledgements by thanking (as they and we all should) Carol Corrado, Chuck Hulten and Dan Sichel who built the foundation of economic research on intangibles and what’s often called the CHS methodology of calculating intangibles investment using national accounts data and the great research by The Conference Board.  The basic data and arguments of the book are based in this economics perspective and use the definition of intangibles as:

There are a couple concrete contributions of this book that I’d like to highlight.

First is their reinforcement of the fact that intangibles have been built through investment. Many business people continue to see intangibles as something so abstract that magically appear when in fact, they spend millions of dollars (most of it expensed on the balance sheet) to build these often long-lived assets. It’s an obvious truth but one still not internalized by many people (hence the surprise by many reviewers).

Second is their “4 S’s” of intangibles, that they are not always but generally more likely to have:

Third, their examination of the S’s lead them to make a set of really interesting arguments about the huge differences are emerging in our economies between producers and users of intangible capital, with the producers and the managers of those companies getting a higher return. They analyze these ideas in relation to secular stagnation, inequality, challenging to financial system and requirements for infrastructure. Yes, that’s an ambitious undertaking. Some of these chapters felt a little superficial but I was happy to see an analysis like this connecting the dots between intangibles and related economic trends. The arguments here are worth reading and developing.

The intangible capitals are important components of the integrated thinking and reporting movement. So it's important to get exposure to the good work being done with IC theory and practice to support truly integrated thinking. I’ve created a to-do item to create a list of the best books on IC for those who are interested. If you want to understand more about IC in business, check out this definition of intangible capital and the two papers below.